Yes, the rumors are true. Last week, a major independent Hollywood film was publicly screened via blockchain – for the first time in history!

LBRY took its blockchain out for a test run at PorcFest XIII, and we're delighted to announce it was a resounding success. Even more so because the screening also marked the private reveal of our new and very exciting media partner, the most well-regarded independent film company out there.

The majority of the LBRY team attended PorcFest, which was the perfect event to spread the word about our platform. 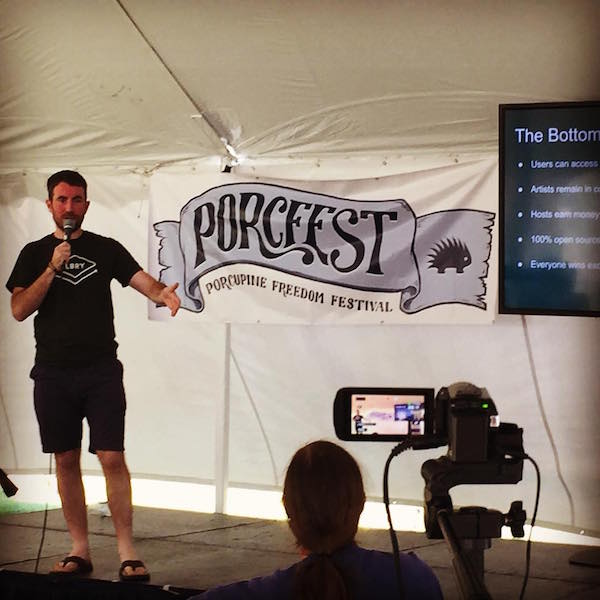 In fact, this year's PorcFest was touted as "Bitcoin Heaven on Earth", and we can't argue with that. Some of us didn't spend a single cent of fiat money the whole week, and the crowds were more than receptive to the concept of a decentralized, blockchain-based content distribution network. Matt Welch, editor at large for Reason, told CoinTelegraph:

"I assume just from being here for a grand total of four or five hours and hearing conversationally at least five references to Blockchain technology (and importantly it not having Bitcoin be the word, it's actually Blockchain), that crypto-anarchy remains fundamental to the current libertarian sense of itself. It is a wing, that wing is with us, it's growing, it's interesting, it's throwing off some of the more interesting activities, and tonight we're going to see the first Blockchain movie at 8 o'clock, here on this compound. So it's clearly an arena for great creativity."

In addition to the screening, Jeremy delivered a well-attended talk entitled, "LBRY 101: Using the Blockchain to Eliminate Digital Middlemen". LBRY also manned a booth in Agora Valley, where we were astounded by the broad appreciation for LBRY's potential. As Jeremy put it:

"Porcfest was one of the most affirming, exciting moment for LBRY to happen yet. It was tremendous to meet hundreds of people who truly understood LBRY and were excited about the future we are creating together. Releasing a major Hollywood film via blockchain for the first time ever is a moment I will never forget. Onwards and upwards!"

Want to know more about the excellent films having their blockchain premiere on LBRY? Well, join our mailing list with the form below and keep an eye on your inbox this holiday weekend for a BIG announcement. Got your fireworks ready?

If the suspense is killing you, then go ahead and start mining LBRY Credits (LBC) today! Our blockchain is live, and LBC can be mined right now via CPU. Learn more here.

Look at that! We received our first international coverage thanks to our appearance at PorcFest.